People think writing is putting ideas into words. It’s not.

Writing is using words to find out your ideas are crap – so you keep choosing more and different words and honing those ideas. Writing is trying hard to think your thoughts until you actually uncover what those thoughts are.

Then you can put them into words.

This idea-having is a process. With my clients, it’s a dialogue: I ask them questions about what they want or what they mean. We hash it out together. We are writing! We improve and clarify the things they’re trying to say, and then I speak those same things back to them a few days later and they say “that’s it” or “that’s not it” or “actually, I’ve changed my mind.”

We find the right ideas. And then we put them into words.

This takes more time than finding words for bad ideas does. It means talking about strategy before you execute. It means you hire the writer not just for your video’s voiceover, but to help you plan the video’s message too. It means you get an architect, not just a builder.

But it gets you a message that’s refined.

And without that, there’s a chance ALL your company’s communications have a Stonehenge Problem. There’s a risk of paying folks to execute your first idea, the one you sketched onto a napkin. The idea that was 80% there, but still needed just a little more refining. 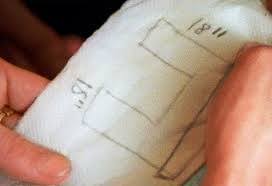 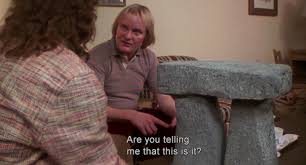 You want to get shit done, right?

But what if you, personally, don’t have time or talent to do ALL the shit yourself?

I know you don’t. But if you own the football, you can hand it off.

There are only two ways to delegate.

Tell the delegee what actual literal physical action you’d like them to take. Using their bodies. Physically.

I mean this. Write (or say) clear step-by-step instructions, like the ones that came with your Ikea furniture, so that your delegee will know EXACTLY what you want from them.

If you don’t know what actual action they should take with their actual bodies, sorry, you can’t delegate. You’re just not ready.

Figure out the actions first.

And give a deadline.

“Thoughts?” is not an action, and you gave no deadline. Shit’s not getting done.

Instead, say: “Take this file, read it and change whatever you don’t like. Please put it in my inbox when you’re done. Do it by Friday.”

That shit’s getting done.

If you don’t know just what actions you’d like them to take and you’re too busy (or too lazy) to decide, you can also hand off responsibility instead of action.

In this case, just tell your delegee the problem you want solved. Then let them solve it any way they want.

That second part is key: If you hand off responsibility, you must hand off authority as well. Don’t separate the two unless you’re going for the Despot of the Year award. Don’t put someone in charge and then not let them be in charge. You’ll crush the personhood right out of them.

Whoever is responsible must also call the shots. If you won’t say just what you want them to do, you must let them decide. No in-betweens.

But go ahead and say where that authority begins and ends.

And give a deadline.

Instead, say: “Please suggest which printer we should buy. Don’t buy it yet; just bring me your suggestion so I can approve it or respond to it. I don’t care how you do the research, but I’d love to hear your pick by Friday.”

That shit’s getting done.

← How not to delegate You'll want to avoid the Stonehenge Problem. →

How not to delegate

[This post contains several instances of a word that’s sometimes bleeped out on American network television. For a creatively censored version of the same post, check out this Twitter thread instead.]

You want to get shit done, right?

But you won’t – unless you know what shit to do.

And your coworkers are the same way. Your boss, your peers, your direct reports. All of them.

That’s why, if you want to get shit done, you have to learn to delegate.

Here is what NOT to do.

1. Don’t delegate what isn’t yours.

To delegate a project, you must have responsibility. That means the outcome of the work is on your head.

To delegate a project, you must also have authority. That means the method for the work is in your hands.

If the work is in your hands and the results are on your head, you own a project. If you own it, you can hand it off.

A lot of projects get screwed up this way: The boss puts Person A on something, but Person B was on that thing already. The boss was trying to pass a ball he didn’t have. Now we’re all running circles. Shit’s not getting done.

2. Don’t take no answer for an answer.

When you delegate, the one to whom you delegate must say “ok, I’ve got this.” They must understand what you’ve asked and agree to do it.

If you get no response, no understanding, no agreement – then you didn’t delegate.

A lot of projects get screwed up this way as well: Your “delegation” sits there as an unread email at the bottom of somebody’s inbox. You may think you delegated. But shit isn’t getting done.

Your shit’s a football.

The points above are obvious. We get them messed up anyway.

So here’s a handy double-check before you delegate:

For companies to delegate well, everyone must always know who has the ball. Think of your latest project: Who has the responsibility? Who has authority?

Then you can delegate some shit.

Why are we here?

Here’s how nonprofits go: They start out with a mission. Someone wants to make things better, and they’ve got a plan for how to do it. At the very least they’ve figured out the first step.

And organizations matter – they let lots of people work together, and they form the infrastructure that lets people fight the good fight more efficiently.

With luck, you get that infrastructure built. You get some funding, build a team, a board and partners and community relationships. The work gets done. The good fight’s getting fought. You’re making this world better.

And it all becomes a habit – which is fine. It’s more efficient. Take the grant, distribute funds, buy donuts for the annual meeting. Hash out next year’s calendar. When will the banquet be?

You do what you do. Poof! You’re not just an organization – you’re an institution now.

You had a mission once – you probably still do, on paper. Can everybody at this table name it? Is it clear to them?

And does it still apply?

And do they actually believe it?

Because they had to be there. You really don’t.

So ask. Take an informal survey of the board; ask folks who work for you. Do they know why you’re here? Can they explain it, quickly and concisely, in a way that makes them want to be here?

Would it change things if they could?

Our institutions must be semper reformanda, always in reform. Self-preservation always swallows up our visions if we don’t keep coming back to them. We trade the good fight for the daily grind.

But you can always rediscover your own mission.

It takes work, and change, and therefore courage. The alternative is worse, though: You keep being here, keep using funds and time and oxygen, with no clear purpose.

← What works in a duck pond? How not to delegate →

What works in a duck pond?

Learning to market your business by studying the big brands

is like learning to surf in a duck pond

You’re tempted to look at Nike, at Apple, at Lego or Vans or Marvel Studios and ask, “How are they marketing?”

You’re tempted to think that if Red Bull’s killing it on some platform, you’ll kill it on that platform too. You want to study all the biggest companies and think, “They’re that big for a reason. I’ll do like they do.”

But that’s like practicing in the Atlantic Ocean so you can go surfing in a duck pond.

What you learn won’t necessarily help your business.

Those things are waves. They matter to the ocean.

The thing you care about is sales. Your business needs to do some business.

And while it’s fun to take a look at the world’s biggest, most familiar brands – what matters is what works for you. In your organization. In a small and local business, if that’s what you’re running. In a space where making waves and catching waves is maybe not as crucial as just

What works in a duck pond?

← Why is everybody bad at this but me? Why are we here? →
« Older Entries